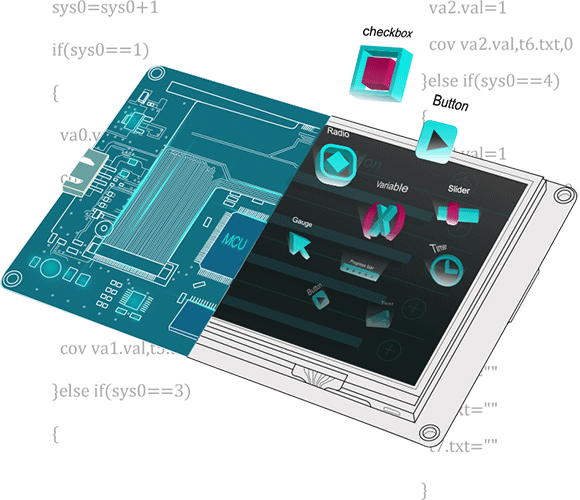 Using the Nextion Editor software, you can quickly develop the HMI GUI by drag-and-drop components (graphics, text, button, slider, etc.) and ASCII text-based instructions for coding how components interact on the display side.

Our mission is to reduce the HMI development workloads.

Nextion Offers an Ease of Use and Cost-effective HMI Solution for You.

Nextion guarantees the availability of all Series products for a minimum of 5 years with CE and RoHS certification compliant. Unless you are specifically notified at the time of purchase, all Nextion series products purchased will be available at least 5 years since 2019. Here is our LTA announcement.

The Nextion Editor software offers an easy way to create the intuitive and superb touch user interface even for beginners. Add a static picture as background, define functions by components, you can make a simple GUI in minutes. The easy Drag-and-Drop components and simple ASCII text based instructions will dramatically reduce your HMI project development workloads.

As for further enhanced technical assistance to your project, Enhanced Support is available for you.

You are never alone to develop your project. Join us in Nextion Community Forum where you can ask questions, share topics and advice with each other.

Note: The Nextion forum is only accessible for registered users.

Nextion TFT screen connected to an ESP8266, OpenWeatherMap and CloudMQTT #2

Nextion TFT screen connected to an ESP8266, OpenWeatherMap and CloudMQTT #3

After having discussed the theory of file based databases in the last article, it's time to demonstrate what can be done with coding only in Nextion language and using the FileBrowser, FileStream, and DataRecord components. And this article will also tell about some actual limits of this approach. But nevertheless, today's project has become a nice and (partly) flexible viewer for .csv files on the SD card.

The Nextion Intelligent P-Series HMI displays become more and more popular because these have much more horsepower under the hood, are available in multiple sizes from 4.3" to 10.1", with a capacitive (more comfortable and multi-touch capable) or a resistive (more robust in rough RF environments) touch engine, and most of them can be ordered boxed in a hobbyist and maker friendly easy to mount housing with an integrated speaker. Due to the much more powerful integrated processor and the bigger memory, the Nextion firmware offers also additional components and functions. But up to now, these are not often mentioned in Nextion-related forums and groups. Thus, I decided to write about the FileStream component which allows random read/write access to files on the SD card or in a reserved area of the RAM. But this time I want to go beyond simple text and ini files like in the demo project in this article and discover together with my dear readers how database tables can be handled.

The Sunday Blog: Characters and their ASCII codes – Casting or conversion?

Most developers know that a character like "A" is represented inside microprocessor systems as a simple number. That's called encoding. Everything started with teletype machines which used a 5bit encoding. The so-called Baudot-code, named after Mr Émile Baudot who invented it in 1874) allowed to encode the 26 uppercase chars of the latin alphabet, the ten numbers from 0 to 9, some interpunction and and some non-printable control characters within that limited 32 character space, using a sophisticated shifting system, comparable to our modern caps lock function. Later, when the first computers came up, with screens and printers, the Baudot code was extended from 5 to 7 bits, giving a 128 character space. Now, almost everything could be encoded without shifting and tricks (they thought): Upper and lowercase letters, numbers, special characters, interpunction, mathematical signs and more control characters. Again, everybody was amazed, until people hit the flaws of the ASCII system when they wanted to do text I/O in other languages than English. That gave birth to the 8bit code page system: In whatever code page, the first half, the characters #0 to #127 remained the same, identical to the ASCII code. In the upper half, the characters #128 to #255 were used for encoding national specifics, like for example à, é, ô, or ç in France, ä, ö, ü, ß in Germany, and so on. In order to display or to print a text correctly, you'd have to know which code page was used for encoding, so that you could use the same for decoding. The ISO standard superseded and re-ordered these code pages with the intention to reduce the national chaos, but without success. And we didn't yet talk about all the languages which use non-latin characters, mostly in Asia. The UTF standard was then created to encode everything, Latin, Cyrillic, Chinese, Japanese, Serbian, etc. plus interpunction, plus graphical block characters plus smileys, plus..., plus... A 32bit space is a great thing to encode more than 4 billions of symbols, but it's not practical because each symbol would eat up 4 precious bytes. Thus, the UTF system applies a few tricks: First of all, the numbers #0 to #127 represent still - you guess it - the ASCII character set, which is still the biggest common denominator of character encoding. Then, parts of the upper half of the first byte indicate if the current symbol is encoded in one, two, three or four bytes (step back to Baudot's shifting system). And the encoding has been selected in a way that the more common a symbol is, the less bytes are required to encode it, which saves storage space and transmission bandwidth. All that to tell you, that yes, even today in 2021, English is the predominant common language and the ASCII character set is still the gold and unambiguous standard for character encoding. That's why in this article, we'll look deeper into the relationship between a character and it's numerical representation.

The Sunday Blog: GPIO on Nextion vs. Arduino – Part 1 (Theory)

Did you know that your Nextion HMI of the Enhanced or Intelligent series have 8 GPIO (General Purpose In-Out) pins, either for smaller autonomous (without extra MCU) projects or to extend the available IO of a connected MCU? This can be very helpful and is a great addition if you have just a few extra physical keys, LEDs, beepers, servos, or rotary encoders to control, or if you want to acquire data from an external sensor! Today, we'll see the "how to" in Nextion code, side by side with the equivalent Arduino code to ease the understanding. From the next episode on, we'll see here small demo projects for everything in practice.

The summary is simple: If you can't find an appropriate component in the Nextion Editor, you have to write it yourself... My last two blog projects about artificial horizons (here the introduction and here the full project) with Nextion HMI made use of it, twice, in the same way: Both displays, the dynamic sky/earth horizon and the azimuth compass aren't based on "classic" components, their space on the HMI page is just empty, everything is done by the moving window code. I got much feedback about this in the different Nextion-related groups on Facebook. People were amazed, but some didn't understand how I made this work. Thus, I decided to go more into details and do a simple animated FM radio frequency display with still more explanations. At this point, I have to say that I'm very grateful for this kind of feedback! As an old developer horse with 30+ years of experience in coding, it's sometimes difficult for me to see where my readers could struggle or have difficulties in understanding, especially if these topics appear trivial or self-explaining to me. So, let's go: 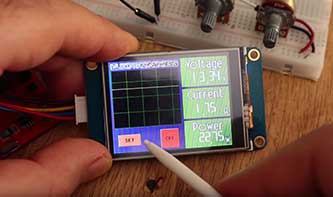 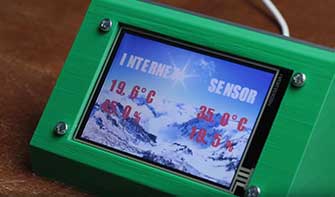 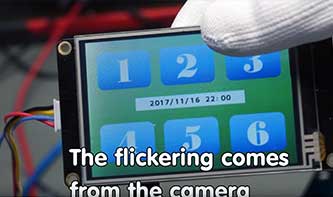 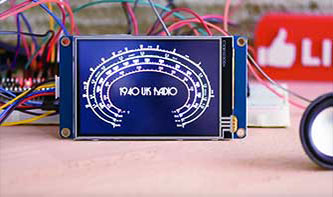 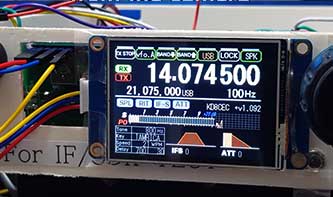 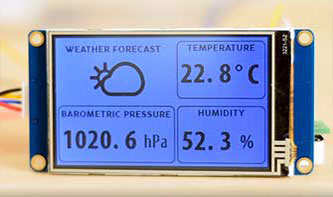 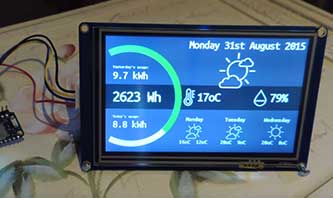 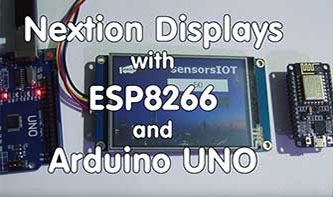