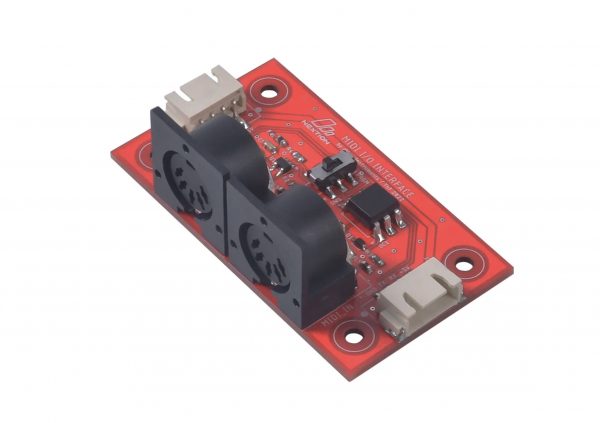 For NEXTION and a multitude of MCUs

Designed for optimal interoperability with Nextion HMI, this universal TTL UART to MIDI interface transforms your favorite Nextion into a full-fledged MIDI controller. But we didn’t stop there. The NexMIDI (as my Chinese colleagues baptized it) is designed to be interfaced not only with any Nextion HMI display, but also with most microprocessors like Arduino, Teensy, PIC, STM32, Raspberry Pi, and so on. Logic level-wise, the RX pin of J2 accepts either 3.3V or 5V TX level from your Nextion Screen or from any MCU.

The TX pin of J2 outputs 5V level, thus it is compatible with the RX pin of all Nextion HMI Series, Basic, Discovery, Enhanced, and Intelligent. And with all 5V or 5V-tolerant 3.3V microprocessors. But we did not forget the “pure” 3.3V universe, for example the ATSamD processors. In one of my next articles, I’ll show how to use the Nextion MIDI I/O interface with a Seeeduino Xiao, based on a Samd21G18A MCU.

A mode switch and a second connector for convenience

We have heard the question before you asked it! “When my Nextion will be connected to J2 and RX/TX are interfaced to the 5pin DIN MIDI sockets, how can I easily re-program it?” The answer is simple: switch SW1 from MIDI I/O into PRGM position! Now, the MIDI interface will be temporarily disabled and the serial signal are passed transparently from connector J1 to your Nextion on J2. So, easy daisy-chaining of, for example, the Nextion Foca Max adapter or any other TTL serial to USB adapter, the NexMIDI, and your Nextion HMI is easily possible.

And, with SW1 in either mode, +5V and GND are always routed from connector J1 to J2 which allows to power the Nextion or other MCU on J2 from J1. To ease again everything, two 4-wire XH cables come with the interface in the box!

A picture says more than 1000 words. That’s why we’ve created a short video which shows all switch and connection variants:

On the technical side…

… we created a 100% MIDI compliant interface. Far away from some cheap DIY hacks, there are line filters for MIDI IN and OUT, a specific driver IC for MIDI OUT, and an optocoupler for a galvanic isolated MIDI IN to ensure stable and error free operation with long MIDI cables >5m. This could be confirmed with tests in (electrically) rough environments like in studios or on stage with a high level of electromagnetic interference due to the presence of a multitude of active electrical devices.

And last, but not least, we made a huge effort to realize this professional device at a more than affordable price. You’ll be surprised when looking at the product page!

Over the last several months, during the beta test period, I’ve already published several blog posts about Nextion sending and receiving MIDI data with example projects and code. In the very near future, I’ll try to concentrate and formalize all this inside a Nextion page template which can then be integrated into your HMI project to easily “midify” it, similar to a Arduino library.