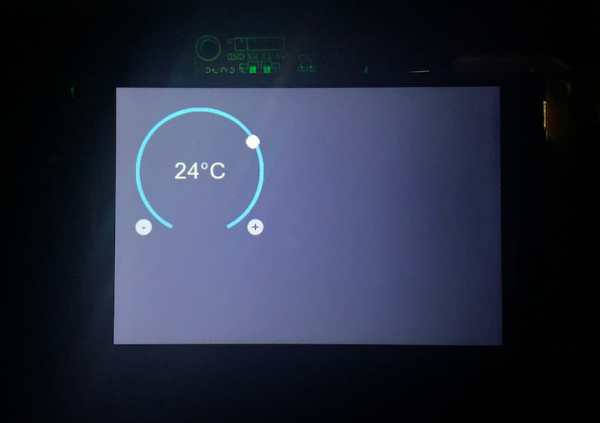 Sometimes, it may happen that you need elements for your GUI but you can’t find an appropriate component in the Nextion Editor. That’s the moment to remember  what you’ve already read multiple times in this Sunday Blog over the last two years: “If you don’t have an appropriate component at hands, build it yourself!” And that’s what we’ll do today. In this first step, we want a clock or rotary potentiometer like component which, besides displaying a numeric set value, does also display it for more ergonomic visualisation with a spot on an almost full circle.

In a first step, I decided to use a picture component as a “container” for what I’m intending to do. This allowed me to save memory and Nextion CPU resources by packing the clear blue arc and the (-) and (+) buttons in a simple jpg which I created with the open source Photoshop clone “The Gimp”. In our example, I choose to build a room temperature “setter” with temperatures going from 17°C to 27°C. There are thus 11 possible values plus the empty position an the bottom which allows to place them similar to the hours of a clock in 30° steps on the circle which greatly simplifies all trigonometric considerations. 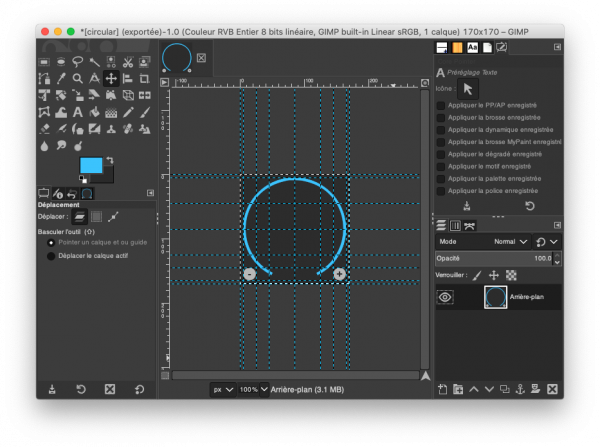 Looking a few weeks back to the array trick

In program.s, we declare the required variables as follows, setting our maximum array index to 10 because we have 11 positions, and an offset of 17 to translate the index values from 0 to 10 into a displayed temperature of 17°C to 27°C and vice-versa:

Then, we place two 20px * 20px hotspots above the visual (-) and (+) buttons to decrease or to increase the temperature setting, each with a little if() clause to prevent going out of range.

Finally, we need some lines of code to take the temperature value in n0, to detect the position index for the corresponding spot, calculate its drawing coordinates, remove the previously drawer spot and draw the new one. This is done in the m1 (+) button Touch Release event. To double this function for the m0 (-) button without maintaining the identical code twice, the m0 Touch Release event calls simply click m1,0. This separation allows also to set the temperature display from an external MCU (Arduino) by sending “n0.val=23ÿÿÿ” and “click m1,0ÿÿÿ”.

I suggest that you download the project code and resources here sblog220410.HMI and you play with it in the Nextion Editor and Simulator to better understand everything although the code is short and simple. In one of my next articles, we will still add touch functionality, so that you will also be able set the temperature by touching a specific point on the circle. But making a fully functional circular slider requires some more tricks. Stay tuned!