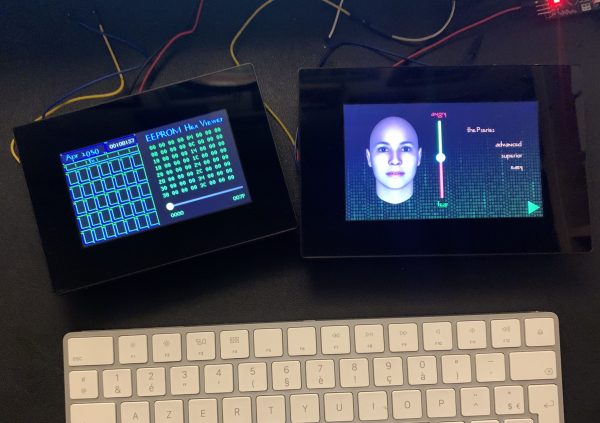 Now for all who have waited for the computing power and the unbelievable graphics power of the “big” 7″ and 10″ Intelligent displays, your patience has paid:

The new 4.3″ and 5″ Intelligent displays are here. And I must say, it’s a real pleasure to work with! Such a pleasure that I spontaneously decided to postpone part 2 of our current blog project…

Both formats come in 4 variants each, resistive unboxed, resistive boxed, capacitive multitouch unboxed, capacitive multitouch boxed. The versions with enclosure are clearly my preferred ones: You have not longer to care about bezels, mounting holes or whatever, you just need a square opening in the housing of your project and you are done. Everything you need to fix it is in the card box. Not to forget the advantage that the boxed versions already contain an internal speaker, so that multimedia projects can be realized quicker and easier than ever before.

How do the new Intelligent HMIs compare to their Standard and Enhanced relatives?

A MCU with 48MHz for the Standard and 108MHz for the Enhanced, but a Multimedia processor @ 200MHz for the Intelligent Series!

Flash ROM: 16MB for the Standard, 32MB for the Enhanced, and 128MB for the Intelligent Series !

Then, to the features:

The integrated multimedia processor of the Intelligent Series provides us with lots of new features and associated components: A video and an audio player, Alpha blending and layering allow (among others) transparency, page loading and transition effects. Components can be moved around on the screen at runtime. File resources on the SD card can be read and written, their content displayed in various forms. And… and… and… I’d say that it’s somewhat like switching from Windows XP to Win10!

And, last but not least, an important consideration – the price!

I can’t speak for your preferred reseller, but if you order directly from the nextion.tech website and if you make the effort to compare, you will be positively surprised: For both sizes, 4.3″ and 5″, the unboxed resistive touch version is even $1 less than the corresponding Standard (T-Series) display. The unboxed capacitive (multitouch) version is the same price as the corresponding Enhanced (K-Series) display. The boxed versions (including the enclosure, mounting brackets, speaker and rubber gasket) are only between $3 and $5 more than their respective unboxed equivalent.

Do you understand my enthusiasm now?

But, don’t fear! That doesn’t mean that I’ll drop everything Standard or Enhanced Series. As long as I won’t present some of the new features in detail, my blog projects will be designed to work on all series.