Skip to content
You are here:Home-The Sunday Blog-The Sunday blog: HMI, cybernetics and the steam engine – Part 1: How it all began

The Sunday blog: HMI, cybernetics and the steam engine – Part 1: How it all began

The Sunday blog: HMI, cybernetics and the steam engine
Part 1: How it all began

This is the first part of a continuing story in which we want to shed some light on how, in the course of his development, man learned to interact with the things in his environment before he set about influencing the form of interaction in the next step. How can we optimally produce and use HMIs (Human-Machine-Interfaces) if we do not know and analyse the task from the root? 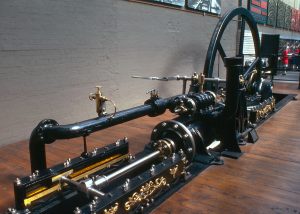 The element that drove progress was cybernetics from the very beginning, even though our ancestors in prehistoric times neither knew the word nor were aware of the concept. What is cybernetics? Most of us have heard the word before, but it may be difficult to imagine what it actually means. So here is a brief summary in one paragraph:

The cybernetic principle in theory…

In the beginning there is always an action that a human being performs with a specific intention. Then he looks at the result and evaluates to what extent it corresponds to his intention. Depending on the degree of satisfaction (usually nothing is perfect at the first attempt) he plans the next action, which will be different from the first one, possibly to achieve a better result. Then he executes it and evaluates the result again to make his next action even more optimal. This is how the so-called cybernetic control loop closes. After a certain number of such iterations, the human being has reached his goal, his action has achieved the maximum desired effect with minimum effort.

… and in practice: Tools

Let’s take a practical example: Let a caveman try to divide a large piece of wood into two smaller parts. In a first attempt, he will probably hit the wood with his hand. The effect is almost zero. The wood has not changed, but the hand hurts terribly. The evaluation of the sensors (eyes and sensation of pain) allows only one conclusion: it does not work like this. In the next steps, he might take a stone in his hand before he hits the wood again, and depending on how the stone is shaped, he will get different results. At some point we will come to the realization that an optimal effect is achieved with a stone that is as hard and sharp-edged as possible – we congratulate mankind on the invention of the hand axe and have arrived at the Stone Age.

After another large number of such cybernetic iterations, the extraction of metals and the discovery of the leverage effect have been added and our hand axe has mutated into a handle axe, which later finds a work colleague in the saw. Even though these were huge advances at the time, we are still many steps away from talking about HMI, because so far we do not have machines, but only tools for many millennia. The human tool interface, however, was the tool itself and the human being literally had it “in his hand” all around, from the generation of the required energy (muscle power) to the perception of the result with all 5 senses.

The introduction of the basic machine concept

The term “machine”, however, is only a few centuries old. The machine differs from the simple tool first of all in that no human muscle power is needed for the desired action, but the energy is generated and made available separately, e.g. water power that drives a sawmill, to look at a simple concept. Although the human being is now relieved of the difficult task of moving the saw with muscle power, he is still faced with completely new challenges: He must regulate the forces of nature. Cybernetic control loops come into play here again, because if the saws driven by water power move too slowly, the mill will not work efficiently. If they move too fast, they overheat and the cut surfaces of the wood char. So someone has to use their senses (sensors) again, observe the process and regulate the water flow at the weir so that the sawmill works optimally. Nevertheless, we are a big step further. Man only has to observe and regulate, the mechanical work is taken over from him by the machine.

And finally the steam engine

Let’s go one last step further (for today): The invention of the steam engine by James Watt. For the first time, energy could be generated at almost any place, one was no longer dependent on the existence of watercourses, because the required fuel (wood and coal) could be transported to most places quite easily. However, in the early days there were some unfortunate cybernetic processes, which culminated in spectacular explosions, until it was known how strong a boiler had to be to withstand a certain steam pressure and the overpressure valve was invented. It was now up to man to regulate the fuel supply so that the combustion chamber temperature and steam pressure met the requirements. For the first time, however, these are physical quantities that humans cannot feel directly due to a lack of suitable sensors. He needs measuring instruments such as thermometers and manometers to provide him with the desired information. And so today we have arrived at the control panel, or dashboard, the first devices that can justifiably be called HMIs.

To be continued next week!